This post explains about what fill flash and full flash photography are.  I'll let the pictures do the talking. You are aware that a picture speak a thousand words, aren't you? :D

Full Flash is easy to explain. For example, at F11, 1/200, ISO100, most likely you'll capture a dark/black frame if you don't turn the flash on. All the light is supplied by the flash, and that is why it is called Full Flash Photography.

A full flash shot of a lovely Crimson Dropwing (Trithemis aurora) dragonfly. And yes, PINK IS STILL IN :D 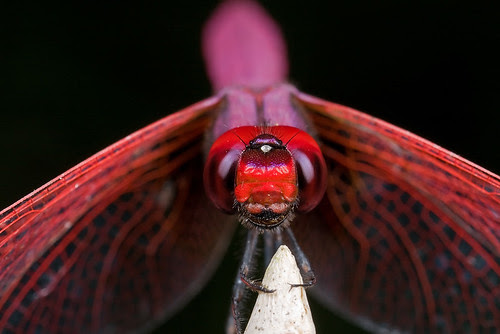 Notice how the background was pitch black? That's because at the setting of F11, ISO100 and 1/200, no ambient light was captured. The only light was the light from my flash, which lit up the subject but not the background, which was too far away.

Now another one thousand words: 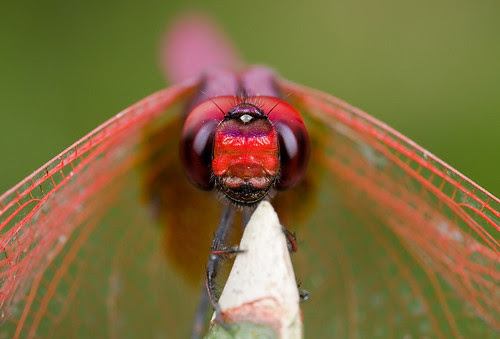 Depending on the amount of ambient light available, you'll have to lower one, or more of the settings to capture some ambient light. In my case, I had to lower the shutter speed from 1/200 to 1/60 (1 and 2/3 stops), increased the ISO from 100 to 320 (1 and 2/3 stops), and opened up the aperture from F11 to F8 (one stop). So you see i had to increase a total of 4 and 1/3 stops there. As a result, i was able to capture a bit of the ambient there, which gave me a bit of green background instead of the usual pitch black background typical of full flash shot. My flash still fired but it didn't need to provide as much light as it did in the full flash shot.

In the full flash shot, my actual shutter speed was actually the duration of my flash. The set camera shutter speed of 1/200 didn't matter as all as no ambient light was captured, remember? At half power, the typical flash duration of say a Nikon SB800 speedlight is around 1/1000th sec. That would be my actual shutter speed. Now that explains why full flash shots are generally (not always) sharper than fill flash and natural light shots. Do check out "Full Flash Photography - 3 Things You Must Know" for more details.

Similarly, for the fill flash shot (1/60, ISO320, F8), even with the flash off, you'd still capture quite a bit of ambience light. In another words, you get two exposures there. One from the ambience light and another from the flash. And if the subject (or you) moved during the short time frame that the shutter was open, you'd get ghosting!

Now that you know what fill flash and full flash photography are, take some time to experiment with both to add more varieties to your macro/closeup images :). Enjoy!