Tips on getting sharp macro images!

More slr macro photography tips in this post :). Just a few non technical tips on ways to stabilize yourself when shooting macro photography. Very simple tips but these will improve your odds of getting sharper macro images! Check these out and make them work for you the next time you go for macro.

Photo courtesy of Leong Sherney. Me in action. I used a pvc tube as my monopod. You can use a monopod too. It greatly reduces the up-down movement and significantly improves your odds of getting sharper shots.

Photo courtesy of Anthony Ng. Holding a leaf with the subject on it - a spider. I often shoot this way, as mentioned in this other thread - Macro Technqiue shooting Bee fly on hand one handed

Photo courtesy of Leong Sherney. I get down on my knees a lot. Another way of stabilizing yourself.

Photo courtesy of Leong Sherney - a pair of mating ant-mimic crab spiders running on my arm...hmm...think i need some moisturizer.

Posted by Kurt (OrionMystery) at 3:34 PM No comments:

My first red ant-mimic jumping spider. I have only found black and bluish ones before. This is my first red one :). Yes, so many firsts this year. Think i am on a roll :D

I think i might have mistaken them for weaver ants before :D

This Myrmarachne plataleoide mimic the red weaver ant as a mean of protection. 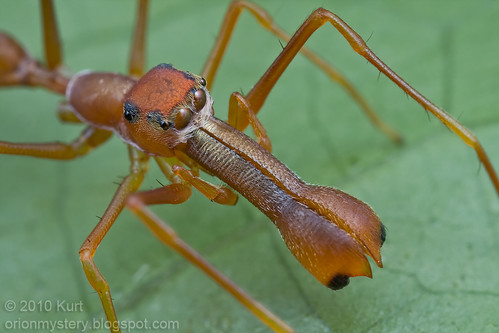 I think this is my first green Lynx spider. Found it in Sg Tua.

and my Stofen based DIY Diffuser. The lighting was a bit uneven as one of the flash heads was tilted at a different angle :(. This was more obvious at lower mag shots.

Leave nothing but foot prints.

Haven't we all heard this saying before? Take nothing but pictures. Leave Nothing but foot prints. Kill nothing but time.

Sadly, most Malaysians are either deaf or stupid. Our Malaysian Government is not doing much either. Most parks here collect entrance fee, some even parking fee. But that's about all. They don't go around collecting the garbage left behind by picnickers.


I found this lovely yellow stonefly at Sungai Tua.

Plecoptera are an order of insects, commonly known as stoneflies. There are some 1,700 recorded species worldwide[citation needed], and new ones are still being discovered. Stoneflies are believed to be one of the most primitive groups of Neoptera, with close relatives identified from the Carboniferous and Lower Permian geological periods, while true stoneflies are known from fossils only a bit younger. The modern diversity however apparently is of Mesozoic origin.[1]

Plecoptera are found in both the Southern and Northern hemispheres, and the populations are quite distinct although the evolutionary evidence suggests that species may have crossed the equator on a number of occasions before once again becoming geographically isolated[2].

All species of Plecoptera are intolerant of water pollution and their presence in a stream or still water is usually an indicator of good or excellent water quality.

I also found one quite some time ago at Sungai Gabai. Incidentally, I had also found mayflies at both parks. I didn't manage to capture any half decent shots of the mayflies though :(.

Incidentally, like stoneflies, mayflies are intolerant of bad water quality too!

I hope I'll still be able to find and shoot these beautiful stonflies and mayflies for many years to come!

Posted by Kurt (OrionMystery) at 11:38 PM No comments:

New Diffuser for the MT-24EX, again!

As you are aware of, I have had a new and improved diffuser since February 2010. Loving the light from it. Sample shots as below:

There is just this one thing that bothers me though - the twin catch lights in subjects with big reflective eyes, such as my favorite spider - jumping spider! In the image above, the highlight/catch lights in the eyes have been toned down in PP. It was much brighter originally!

Now compare it to another jumper shot lit with a big bowl diffuser:

I prefer a single, bigger catch light like this.

For more lighting comparison, please check out A Comparison of Different Lighting Setups.

Now a couple of sample shots from the newest diffuser:

The dome is transparent PP material from a mineral water bottle, covered with 2 layers of polystyrene sheets. Idea from Stephen's cup diffuser (SteB1) on Juza forum.

I used 3M medical tape to hold the concave diffuser in place. But i think I will get some moldable plastic to DIY a better holder!

Definitely nicer catch lights in the spider's eyes. However, the catch lights seem to be much brighter in the smaller pair of front-facing eyes though.

More to be improved on the newest diffuser. Perhaps a more opaque material Stay tuned.

Just sharing a few shots of this big and beautiful jumping spider. She was really friendly and curious. Quite cooperative too for a jumping spider :D

Notice the two catch lights in each eyes of this beautiful spiders? That's a big clue that twin flash was used. You can see how different light sources - speedlite with softbox vs Stofen-based twin lite diffuser vs concave diffuser - affect the catch lights in this post.

Do check out the latest concave diffuser that I have been using since March 2010 to diffuse the light from my MT24EX. I'm loving it!

And I thought I was writing in English :D.

I'm glad to receive feedback on that though and thats why I've edited the post and added many examples and images.

Well. Check it out again and let me know which part you find hard to comprehend.