Prior to this, I have been using my version of "cup diffuser" for the MPE65 1X-5X macro lens

combo for a couple of months now and loving the light from it. More about the cheap yet great DIY Concave Diffuser here.

About a week ago, I tested out the "concave top diffusers". It looks like this:

the opening on the one on the right hand side goes onto the MT-24EX flash head. The one on the left is upside down for comparison

the same pair from a different angle

The opaque concave tops are from those toy capsules widely available from toy vending machines in most convenient stores/sundry shops in Malaysia.

front view of the setup

The housing, as you can see, are from Justea packet drink (Tetra Pak drink packaging). It was actually quite a task to make the housing fit snugly onto the MT24EX flash heads. However, you can use this moldable plastic to make housings that fit nicely onto the flash heads.

Surprisingly, additional layer of diffusion from the concave top actually almost doesn't cause any loss of light as evident in the following quick tests:

without the concave top diffusers:

However, even with the slightly better handling of highlight, my latest concave tops plus cup/tent diffuser still can't pass the ultimate test: the golden tortoise beetle! In fact, i failed miserably :D

blown highlight all over, even at -2 FEC (flash exposure compensation).

Maybe I need to look for some Vellum paper to replace the polyfoam sheet I'm using for the cup/tent? Still looking for a shop in town that sells it.

To be fair to the awesome tent/cup diffuser and concave tops, I need to point out that I had tried shooting a golden tortoise beetle with just natural light and still ended with blown highlight. But next time, I'll try to use a CPL.

Note: the concave top diffuser is the brainchild of SteB1 (Stephen). If you would like to read more about his excellent analysis of various diffusion methods, check out the following:

Some Ideas on Macro Flash Diffusion

Some wonderful weevils of Malaysia

A collection of some of my favorite weevil images, all shot in Malaysia. Funny how I didn't even know about these cute weevils before I took up macro photography.

A female giraffe weevil. Check out how she builds a nest to lay egg in here.

Weevil taking off. Shortlisted in Photoradar's POTY 2010 but that was as far as it went.

White fluffy weevil. The white stuff is not fungus/mold.

Another mating pair of giraffe weevil, with an ant watching:D. No sexual dimorphism in this species. Watch how a female build a nest here.

If you would like to check out some beautiful beetles of Malaysia, look here.

Email ThisBlogThis!Share to TwitterShare to FacebookShare to Pinterest
Labels: collection

The lesser of the two weevils :P

So i posted two images of a same weevil in a forum:

with natural light and reflector

to hold the branch still to minimize wind movement.

Someone commented: #2 is the lesser of the two weevils. Another one laughed :D. I had no idea what was going on.

Finally someone showed us this clip:

Posted by Kurt (OrionMystery) at 12:25 PM No comments:

Some awesome ant-mimic spiders of Malaysia

Spiders are really cool, especially those ant-mimic spiders. I have come across and also photographed so many ant-mimic jumping spiders and ant-mimic crab spiders in Malaysia. Here are some of my favorites. More awesome Tropical Spiders here. 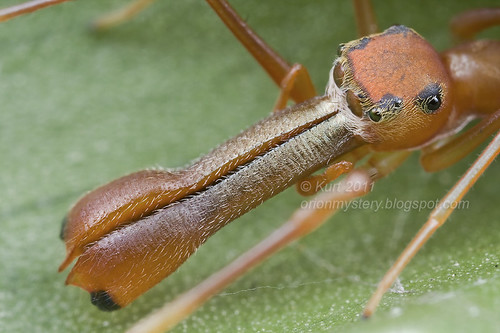 A male black ant-mimic jumping spider. Don't have a female one yet.

A male ant-mimic crab spider with prey - a weaver ant

Posted by Kurt (OrionMystery) at 10:34 PM No comments: