I have been using my Sigma 150 mainly for natural light shot for more than a year now and loving it. Just a few days ago, I acquired a pre-owned Sigma 180 so I thought I might do a little bit of side by side comparison of the two. Not on the IQ though. For that you can refer to a few excellent lens review sites such as Photozone, SLR Lens and Camera Review etc. I am mainly interested in what the extra 30mm can give me!

Physically, here are the differences:

As you can see in this image, the Sigma 180 is quite a bit longer than the Sigma 150, but only about 70g heavier. However, as you will find out later, the extra 30mm does makes quite a lot of difference! 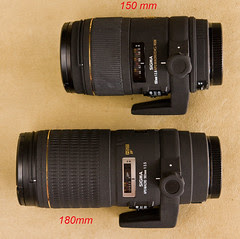 I didn't think the extra 30mm would create any significant difference, until one fine day when I shot one same caterpillar with  a Facebook friend of mine from Singapore. I used a 150mm whereas he, a 180mm. As you can see, the extra 30mm really rendered the background more out-of-focus, and made the subject stand out! 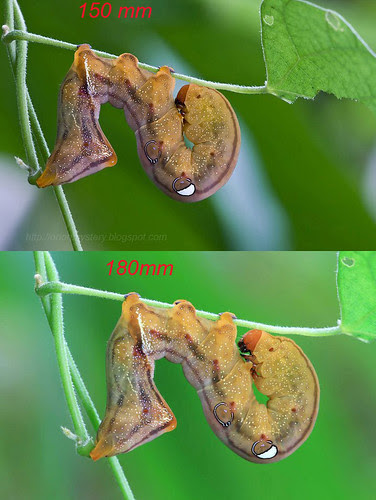 Both images shot with natural light and the use of a reflector.

Another comparison shot. You can see clearly that at the same magnification (the flower was similar in size in both images), the 150mm saw more of the background, or in other words, had bigger FOV (Field of View), compared to the 180mm. The dark, vertical bars were my front gate. The 150mm saw four vertical bars whereas the 180mm saw only 3 bars. The working distance was different since with the 180mm, I had to move the camera/lens/tripod a little bit further away from the subject/flower. 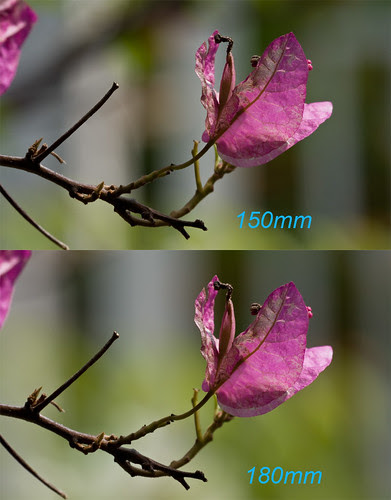 Check out the "truck and barn" series of images in this link for a great illustration of the same point.

You can calculate the FOV by using the calculator on this site:

The Sigma 180mm is only 70g heavier, but a couple of hundreds (USD) more expensive. However, the extra 30mm clearly buys you much better ability to isolate the subject from the background. The extra working distance is great for shooting more skittish macro/close-up subjects too!

Edit: another comparison shot. I found the same frog again. The 180mm image was shot at F10 whereas the 150mm image F8. More or less the same magnification as the frog looks about the same size in the images. The 180mm image was slightly cropped on the left. So consider the slight crop and the higher F number a handicap to the 150mm :D. Again, it's easy to see that the 180mm has a much better bokeh! 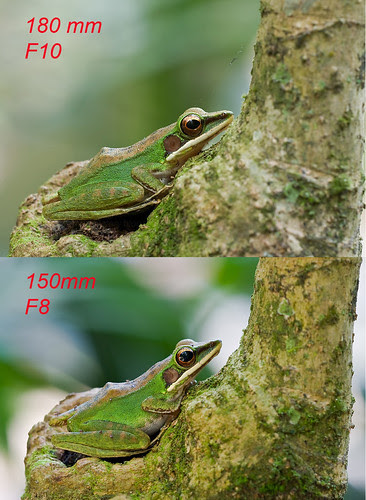 Both images shot with natural light and the use of a reflector.

Posted by Kurt (OrionMystery) at 7:30 PM