I was out looking for bugs again when I found this newly emerged cicada perching on its own exuvium, pumping fluids to its wings, waiting for its body to harden before taking its first flight! I spent the next one hour photography this cicada.

I believe I missed the emergence process by about 10 to 15 minutes. Better luck next time! The newly emerged cicada was about 5 inches from the ground, on the root of a tree. So i lowered my tripod. My cheap tripod, which cost me RM200 ( about 65 USD), could go quite low, if it wasn't for the centre column which gets in the way.

But I really wanted to get low enough so I could shoot from an angle which maximizes my DOF. A light bulb lit up in my head and I found myself a blunt, dry tree branch on the forest floor and started digging!  Ah..i forgot to include dry tree branch i used for digging in this pic. :D. 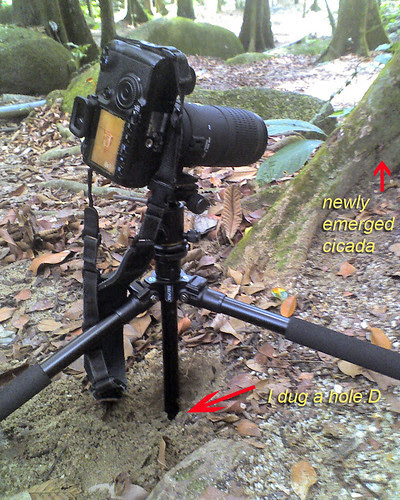 A closer look. Tripod brand name removed. I probably should start carrying a spade in my backpack. I wonder if there is a foldable spade:D. Although I managed to get quite low, it still wasn't as low as I would have liked. The next time you see holes and earth all dug up, it may not be the work of the wild boars. 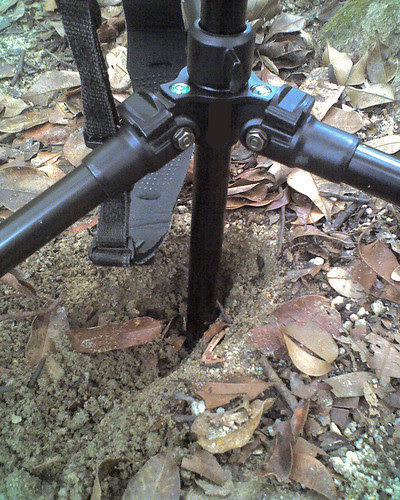 And then Derrick suggested an idea - fold up the tripod and put it on the ground, like this: 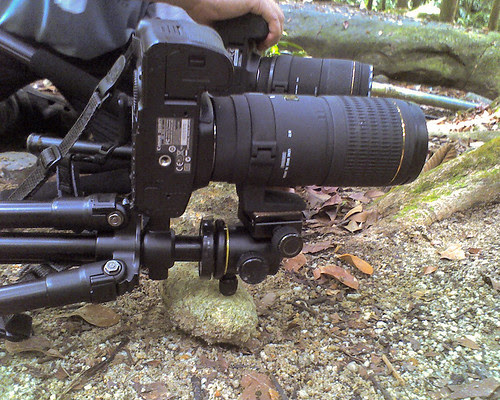 Excellent. Now we could get really really low!

I can't show you the actual shot from this session yet but I have a somewhat similar shot I took back in November 26, 2007 - my first sighting of an newly emerged cicada. Same type of cicada, same park. Same "a few minutes too late" :( 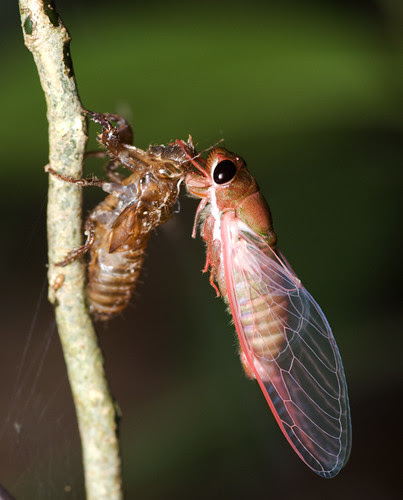 You don't have to go through all this trouble though if you are willing to spend some money on the right tripod. I have seen one where the center column can be removed. Beanbag is also another idea, if you don't mind an additional 400 gram or so in your backpack.

Posted by Kurt (OrionMystery) at 6:53 PM