Photomerging in Photoshop for extra DOF?

Photomerging is one thing that Photoshop (mine is CS3) does beautifully! Gotta love it! In fact, i helps to get me extra DOF too. How so? Let's dwell into the details here!

First, lets look at the merged image i.e. the outcome:

The whole robber fly is in focus, from head to tail...except the legs...

Now lets look at the two pre-merging images that contributed to the merged images above:
the left portion. Note that the right portion of this image is not very in focus. 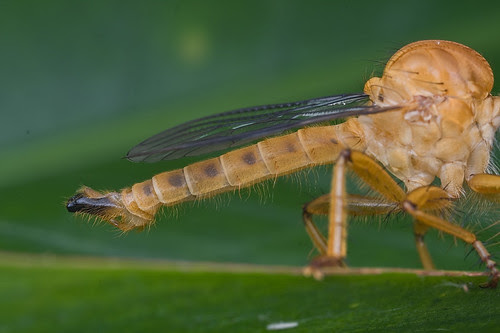 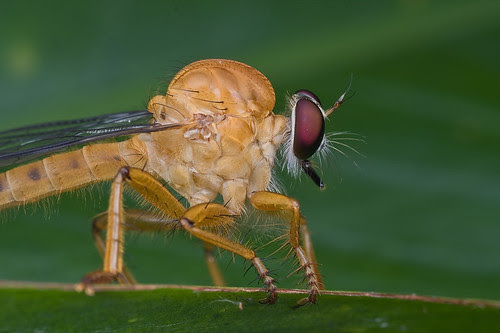 The merged images. Notice there's area with empty canvasses on the top left and bottom right. I could have just cropped these out but i chose to add canvas by using the clone tool because i wanted more breathing room for my robber fly.

Photoshop must have an intelligent algorithm to select the joint area!

I definitely couldn't have achieved the same DOF with a single shot. However, I only did this because the robber fly was to big to fit into the frame at the MP-E65's minimum magnification of 1:1 on the crop sensor of the 40D.

So give it a try. File - Automate - Photomerge, then browse and select the images you want merged. The rest is automatic!

Posted by Kurt (OrionMystery) at 4:44 PM